Contrary to the popular adage, ostriches don’t bury their heads in the sand. No, that “ignorance is bliss” attitude is reserved for the execs at Prada, who choose to ignore how the ostriches who were turned into their ostrich bags and sofas were raised and killed. But ignorance is not bliss, not for the ostriches, and PETA is out to show Prada why it should pluck ostrich skin from its line.

Our ostrich hopped the L train to Fifth Avenue in New York City, where she joined in a protest outside a Prada store:

#NYC: @Prada takes ostrich bags out of window during our protest asking shoppers to pull their heads out of the sand pic.twitter.com/wH5g4dtokz

Then she hightailed it to Vancouver to be there for Friday’s grand opening of Prada’s flagship store: 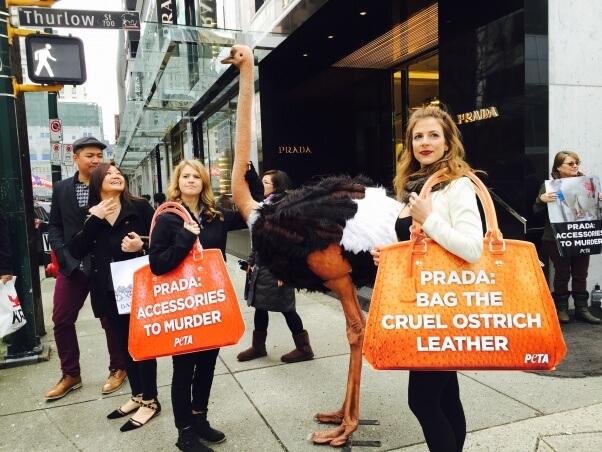 The ostrich and her friends showed Prada the first-ever exposé of the highly secretive ostrich-slaughter industry, released by PETA. It shows how young ostriches are kept in barren dirt feedlots until they’re trucked to slaughterhouses. There, the 1-year-old birds are turned upside down in a stunner, then have their throats slit and their feathers plucked out, creating the bumpy-textured skin that Prada uses in its handbags and store sofas.

Ostriches are smart, sensitive, and curious birds who don’t deserve to be shocked, slaughtered, plucked, and skinned. Pockmarked ostrich purses are a pockmark on the face of fashion, especially when faux skin is readily available.

Tell Prada and Hermès that you won’t be shopping while they’re selling the skins of ostriches and other exotic animals.