Those zany kids at PETA Asia-Pacific are never content to rest on their … um, laurels—and thank goodness for that! Not satisfied to raise awareness about animals in China, Australia, Japan, Korea, New Zealand, and the Philippines (among other countries), they’re now moving into new territory: Mongolia.

In a new pro-vegetarian ad proclaiming, “Turn Over a New Leaf, Try Vegetarianism,” Mongolian singer-songwriter Nominjin wears a spectacular full-length gown made of fresh lettuce leaves. This will be the first PETA Asia-Pacific ad to appear in Mongolia.

“Kicking the meat habit is one of the most rewarding actions I’ve ever taken in my life,” Nominjin said. “The best thing that anyone can do for animals, the Earth, and their own health is to go vegetarian.”

You can’t just grab a lettuce-leaf dress at the nearest department store, of course. It involves a trip to the market—and then a whole lot of work to assemble, as you can see in these pictures from the shoot: 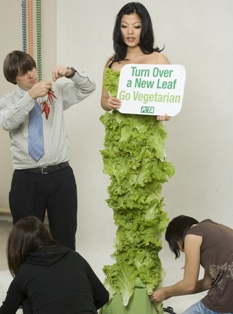 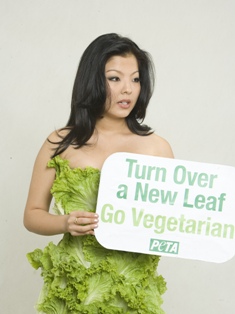 BTW, that’s PETA Asia-Pacific Director Jason Baker stringing together the peppers—proving that there’s nothing he won’t do to help animals!