Lea Michele is always helping animals win, and now it’s Lea who’s scooping up a trophy. At VH1’s Do Something Awards, lovely Lea accepted the Do Something Award in the “TV Star: Female” category for her work with PETA and used her acceptance speech to remind the audience not to ride in cruel horse-drawn carriages.

Over on NBC, America’s Got Talent judge Howard Stern used his critique of a performer with a cockatoo to speak up for birds used for food. “I recently stopped eating turkey and chicken and all birds and now I know why,” he said. “They seem to have some sort of intelligence and I don’t want to wreck their lives, so I’m not eating them anymore. I’m not, like, a bird vampire.”

The singer who recorded the jingle for Marineland is now raising her voice against the notorious animal abuser. After eight former trainers publicly revealed that the park forced animals to swim in water so filthy that it blinded them and caused pieces of their skin to fall off, Suzie McNeil is trying to have her voice removed from Marineland’s commercials and is encouraging people not to go to the park.

Lady Gaga found herself the target of massive backlash from fans, animal advocates, and fellow celebrities when she reneged on her vow not to wear fur and draped herself in the skins of foxes and rabbits. Russell Simmons wrote Lady Gaga a letter asking her to reconsider her support of the fur industry:

Lady Gaga, you are a great artist who has used your celebrity to fight for equality and fairness, so I know you are a compassionate loving human being who would not publicly defend others for their unconscious behavior. LET’S NOT SET OFF A CHAIN REACTION WHERE ARTISTS ACT AS SUPPORT FOR A SOCIETY’S UNCONSCIOUS BEHAVIOR. Let’s instead do what artists have done throughout history and be on the side of love and compassion, because that is our natural state.

Olivia Munn, who starred in an anti-fur ad for PETA, tweeted, “When u see FUR, an animal was TORTURED for it. Watch this video & tell me if you think it’s ‘art’.” As Olivia’s fur-farm exposé makes clear, there is nothing artistic about skinning animals alive.

A host of other celebrities used their tweets to be sweet to animals: 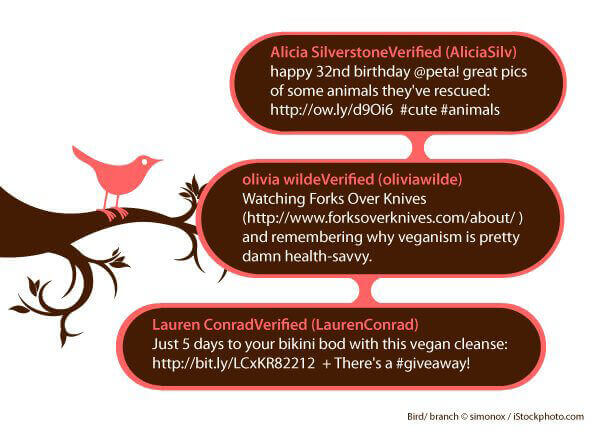