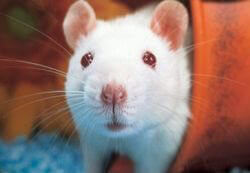 Many cancers can be cured today—if you are a mouse. Unfortunately, humans are still waiting for cancer cures that will work for them. Decades of animal-based laboratory tests have given us some treatments for mice who are genetically and otherwise manipulated to grow tumors. But if we are seeking medical advances for humans, are animal-based experiments really the most effective way to spend our limited resources?

One woman said it to me this way: “If my child was dying, and an animal experiment might find the cure that saves her life, then I wouldn’t hesitate to sacrifice those animals.” Most of us would make enormous sacrifices to save our children, and that’s completely understandable. But to think only in terms of “my child vs. a mouse in a laboratory” misses the essential question we should be asking: Does testing on animals actually yield useful results? I’d like to share a personal story that changed my beliefs about animal testing.

You may remember the drug thalidomide. It was widely prescribed in many countries in the early 1960s for several purposes, one of which was to alleviate morning sickness in pregnant women. The drug caused severe birth defects, and thousands of children were born with shortened limbs and flipper-like hands. Thalidomide was animal-tested before it was used in people, and no adverse effects were reported. Even after the human tragedy started to unfold, subsequent animal testing of thalidomide found similar birth defects in only a few species of animal, and only at very high doses. Simply put, animal tests of thalidomide were not predictive of the effects in humans.

I narrowly escaped being one of the thalidomide babies myself. My mother was traveling in the U.K. during the first months that she was pregnant with me. She had severe morning sickness, so she visited a doctor who prescribed a medication. She took the pills for several weeks, and only when she returned home to the U.S. did she hear about thalidomide on the news. Mom recently told me about her reaction: “My heart just sank when I heard the news story. I had never asked for the name of the medication I took, and I was certain that it was thalidomide. I still had the bottle and was relieved to discover it was a different drug. I never could have forgiven myself if I had done this to you.”

After I found out how lucky I am to be whole and healthy, I started to wonder just how useful animal testing really is. Historically, experiments on animals have been given credit for much more than what they actually helped us learn. And in modern medical science, with its focus on cellular and molecular function, the differences between species far outweigh the similarities. In fact, many drugs have measurably different effects in men and women—how much greater are the differences between humans and other animal species? Not only does testing on animals give misleading results about the risks of drugs in people, but it can also delay discovery of useful human therapies. Penicillin is harmful to guinea pigs, rats, and hamsters. (It was a human trial that opened the door to the discovery of antibiotic drugs.) The painkiller Vioxx was withdrawn from the market after it was found to increase risk of heart attacks and strokes and was found to be responsible for many deaths. Vioxx was tested in several species of animals, and the results suggested that the drug would have heart-protective properties. All new medications and therapies must eventually be tested in human clinical trials, and results from animal testing can give a false sense of security about potential risks to human patients. The National Institutes of Health admits that an astounding 95 percent of all drugs that test safe and effective in animals fail in human clinical trials.

The good news is that modern medical science offers many alternative research methods that more accurately predict human results. In vitro testing on human cell cultures, computer modeling, epidemiological analysis, and clinical studies can all be used to develop and test new therapies. 95 percent of medical schools have shut down their animal laboratories and rely instead on cadavers, simulators, and observation to train medical students on what they really need to know: how the human body works.

Explore PETA.org to find out how you can help bring animal experimentation to an end. Only give to cancer charities that do not use animals in experiments, such as the Children’s Oncology Group, Dr. Susan Love Research Foundation, Gateway for Cancer Research, and others that help people without hurting animals.