More than 3,000 elephants—including babies—are held captive in elephant tourist-attraction “orphanages” and “parks” across Asia, and the number is growing, according to new findings from our friends at World Animal Protection. The animals are beaten into submission when young and then forced to let travelers take rides on their backs and to perform confusing and sometimes painful tricks, including walking on tightropes, balancing on two legs on a small drum, painting pictures, and dancing. But if tourists knew what elephants endured for their vacation photos, they would hit “delete”—on both the pictures and the industry. 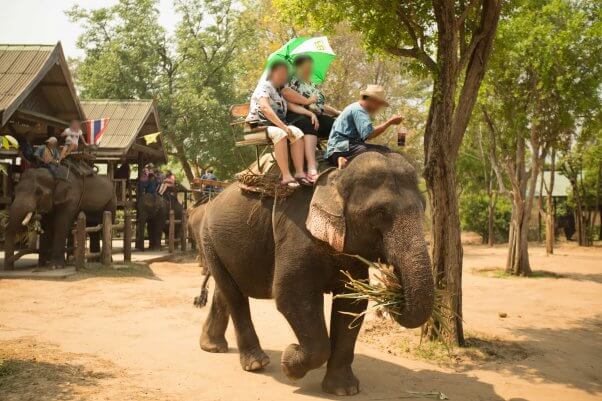 1. When they’re babies, elephants are taken from their mothers and families in the wild. Because they have a high sale value, not only are babies illegally captured, their protective mothers are also often killed as they try to save them.

2. “Training” begins immediately. The babies are tied down and beaten with bullhooks and other instruments designed to inflict pain until their spirits are broken and they’re willing to obey their “trainers” to avoid pain.

3. Researchers have found that elephants who are subjected to this “breaking” or “crush” process often develop post-traumatic stress disorder.

4. Elephants in nature live in matriarchal herds in which they forage for fresh vegetation, play, bathe in rivers, and travel many miles a day. Held in captivity, they can move only in small circles in an arena or along a short path while carrying humans on their backs, even on the hottest days. 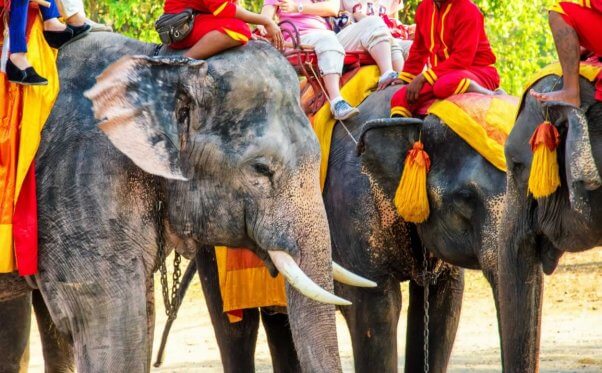 5. When they aren’t working, the animals are usually kept in sheds or shacks—often with concrete floors that damage their legs—and they’re bound by chains that can be so tight they can barely move.

7. The lack of exercise and long hours spent standing on hard surfaces are major contributors to serious foot problems, arthritis, and back injuries. Most captive elephants die decades short of their normal lifespan.

8. According to World Animal Protection, “Between 2010 and 2016 in Thailand alone, 17 fatalities and 21 serious injuries to people by captive elephants were reported in the media. Unreported incidences involving local elephant keepers are likely to make this figure much higher.”

9. Because public awareness of cruelty to captive elephants has increased, many attractions are trying to dupe tourists by adding words such as “sanctuary,” “rescue center,” “refuge,” and “retirement facility” to their names. But the abusive training methods and deprivation are often the same and make the elephants follow the trainers’ commands to let people ride, feed, touch, or bathe them. 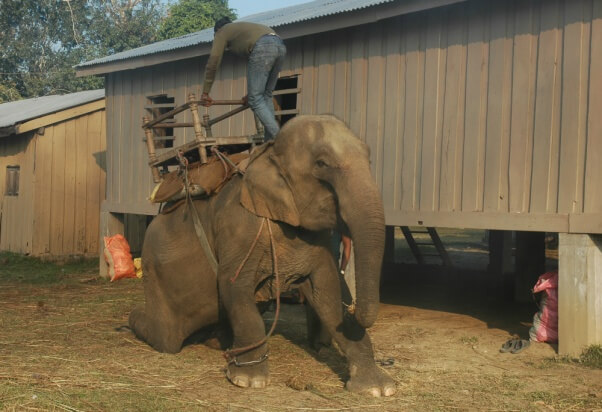 In a survey of 13,000 people, one of the primary reasons travelers gave for wanting to patronize elephant rides and shows was “love of animals.” But anyone who shares any concern for the dwindling elephant population or captive elephant abuse should work to end these tourist attractions—not fund them.

Following a series of meetings with PETA, the world’s largest travel site, TripAdvisor, announced that it would end all ticket sales to elephant encounters as part of a broad-sweeping policy change that also prohibits sales for “swim with dolphins” programs and tiger encounters. More than 100 other travel companies have followed suit. If you spot any ads for elephant rides or performances of any kind, please complain.

Be sure to follow PETA on TripAdvisor for tips on ways you can be kind to animals when you travel.

Please share this post on your social media platforms and urge your friends and family not to be taken for a ride.